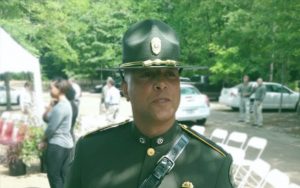 It was a typical day for Mississippi Game Warden, Al Crawford. He and his team had been called to put down a mortally-wounded alligator. Al was leaning against the back of the truck 12 feet away from the gator when the shot rang out. At the same time Al felt something in his eye, but he had no idea what it was. Working outside, he had gotten debris in his eye before, so he drove over to his family optometrist – Dr. Stacie Moore. Even though it was late Friday afternoon, Dr. Moore hustled him in to have a look. Conducting a thorough exam, she could tell that a foreign object was lodged deep inside Al’s eye – however, Dr. Moore could not identify it. What she did know was Al would lose his eye if the foreign object wasn’t removed immediately.

Dr. Moore called the closest emergency eye surgery center (which was in Memphis) to let them know they were coming, loaded Al into her car, and drove the three hours to get him there safely. Upon arrival, the surgical team was ready and took Al straight to emergency surgery. The ophthalmologist removed the lens from Al’s eye to access the object lodged within. The damaged lens was then replaced with a new artificial lens. Standing by Al’s side throughout his surgery, Dr. Moore stayed the night at a hotel across the street while he recovered from surgery.

The next morning, Al and Dr. Moore finally discovered the cause of this commotion. Taped to Al’s medical records were three pencil lead-sized fragments from a .22 caliber bullet. After a two-month recovery period, Al’s vision is good – with the aid of glasses.

You can see the original article at mseyes.com/al/.